It's been awhile, and by popular demand ...

Treasuries have rebounded somewhat since the beginning of the year, and there was tepid demand today for Five Year Treasuries, from Bloomberg: Treasuries Drop as Record Sale Draws Higher-Than-Forecast Yield

Treasuries plunged as the government sold a record $30 billion of five-year notes at a higher yield than forecast, indicating weak demand.

The auction, which caps a week when the Treasury raised $78 billion in notes and bonds, may signal investors will have trouble absorbing the as-much-as $2.5 trillion in debt the U.S. is likely to issue this year ... 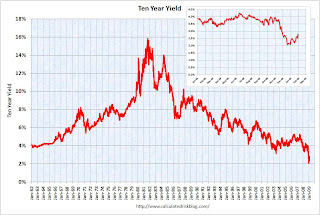 The yield on 3 month treasuries has risen to 0.22%. I guess that means less fear than a yield of zero!