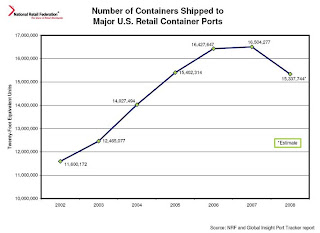 Click on image for larger graph in new window.

Year-over-year cargo volume at the nation’s major retail container ports fell for the 17th straight month in December, completing the slowest year since 2004 as the U.S. economic downturn continued, according to the monthly Port Tracker report released today by the National Retail Federation and IHS Global Insight.

Volume for the year was estimated at 15.3 million Twenty-Foot-Equivalent Units, compared with 16.5 million TEU in 2007. That would be a decline of 7.1 percent and the lowest total since 2004, when 14 million TEU moved through the ports. One TEU is one 20-foot container or its equivalent.

U.S. ports surveyed handled 1.23 million TEU in November, the last month for which actual numbers are available. That was down 10.3 percent from the 2008 peak of 1.37 million TEU set in October and down 11.8 percent from November 2007.

“Between the economy and the customary winter impact of the slow season, port traffic is very weak,” IHS Global Insight Economist Paul Bingham said. “Port traffic is projected to continue to be very slow due to the underlying weakness in demand.”

All U.S. ports covered by Port Tracker – Los Angeles/Long Beach, Oakland, Seattle and Tacoma on the West Coast; New York/New Jersey, Hampton Roads, Charleston and Savannah on the East Coast, and Houston on the Gulf Coast – are rated “low” for congestion, the same as last month.