The following graph shows the price declines from the peak for each city included in S&P/Case-Shiller indices. 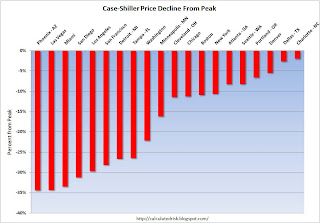 In Phoenix and Las Vegas, home prices have declined more than 34%. In Charlotte, prices have only declined about 2% from the peak.

This graph illustrates the point Professor Krugman made in August 2005: That Hissing Sound

When it comes to housing ... the United States is really two countries, Flatland and the Zoned Zone.

In Flatland, which occupies the middle of the country, it's easy to build houses. When the demand for houses rises, Flatland metropolitan areas, which don't really have traditional downtowns, just sprawl some more. As a result, housing prices are basically determined by the cost of construction. In Flatland, a housing bubble can't even get started.

But in the Zoned Zone, which lies along the coasts, a combination of high population density and land-use restrictions - hence "zoned" - makes it hard to build new houses. So when people become willing to spend more on houses, say because of a fall in mortgage rates, some houses get built, but the prices of existing houses also go up. And if people think that prices will continue to rise, they become willing to spend even more, driving prices still higher, and so on. In other words, the Zoned Zone is prone to housing bubbles.

There was a bubble in Flatland too caused by the rapid migration from renting to buying - facilitated by loose lending - that pushed up Flatland prices. But those bubbles were small compared to the bubbles in the Zoned Zones.

Now that the bubble has burst, prices in the more bubbly Zoned Zones are falling much more than in Flatland.

Detroit is an exception with prices off 27% from the peak, even though Detroit never had a price bubble. The reason is Detroit has a weak economy and a declining population. Since housing is very durable, there is excess supply in Detroit, and prices for existing homes are below replacement costs.

Another exception is New York. Prices in New York are only off 10.6% even though New York is part of the Zoned Zone. New York had a price bubble, but until recently prices had held up pretty well. That is changing right now.

And here was Krugman's conclusion from August 2005:

Meanwhile, the U.S. economy has become deeply dependent on the housing bubble. The economic recovery since 2001 has been disappointing in many ways, but it wouldn't have happened at all without soaring spending on residential construction, plus a surge in consumer spending largely based on mortgage refinancing. .... Now we're starting to hear a hissing sound, as the air begins to leak out of the bubble. And everyone - not just those who own Zoned Zone real estate - should be worried.