Yesterday we focused on strip malls, and the probable impact on malls of the imminent Steve & Barry's BK (now official). For more on the impacts on malls, see this story from MarketWatch: Steve & Barry bankruptcy further pressures malls

Lets look at lodging today. A Goldman Sachs research note out this afternoon mentioned that the average US hotel occupancy rate over the last four weeks was 65.9%, down three percentage points from the same period one year ago. Goldman further noted that YoY comparisons of vacancy rates have been deteriorating all year.

This is more bad news for commercial real estate construction. Based on the recent building boom, lodging was even more of a bubble than multimerchandise shopping! 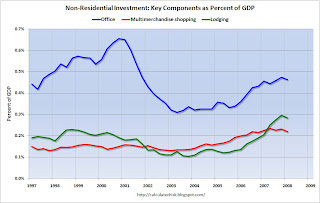 Lodging and multimerchandise shopping saw the largest percentage booms, while office space was less than the office boom in the late '90s. These are the three categories of commercial construction that are probably the most overbuilt - and will probably see the biggest declines in investment.

This data fits with the forecast from American Institute of Architects chief economist Kermit Baker:

"On the commercial side, best I can tell the problems are in all of it - offices, retail, hotels. I think we will see a prolonged decline."
Kermit Baker, CNNMoney May 17, 2008