The following graphs are for Los Angeles using both nominal and real (inflation adjusted) prices. 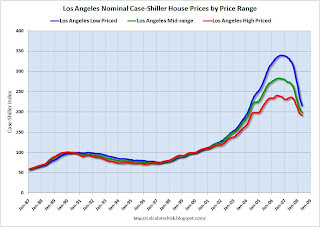 The first graph shows the nominal Case-Shiller prices for homes in Los Angeles. 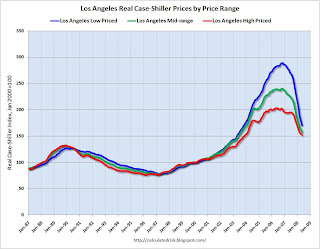 Looking at the data in real terms probably provides a better idea of how much further prices will fall. If prices fall to the January 2000 level in real terms (shown as 100 on the graph), then the high end has fallen about half way from the peak, and the low end about 2/3 of the way from the peak in Los Angeles.

I've noted this before: In a number of previous housing busts, real prices declined for 5 to 7 years before finally hitting bottom. That is my expectation for the duration of the price declines in the bubble areas. The bottom for real prices will probably be in the 2010 to 2012 period. The less bubbly areas will probably bottom sooner.

If this bust follows the historical pattern, we will continue to see real price declines for several more years, and the rate of decline will probably slow (imagine somewhat of a bell curve on those graphs).