Housing: Why was Kudlow so wrong?

Note: It is not my intention to embarrass Mr. Kudlow, rather to simply show why his analysis was wrong (typical of many back in 2005) - and why the "housing bears" were correct.

Back in June 2005, Larry Kudlow wrote: The Housing Bears Are Wrong Again

"If [the housing bears] had put a little elbow grease into their analysis, they would have learned that new-housing starts for private homes and apartments haven’t changed much during the past three and a half decades.

Although year-to-date housing starts have kicked up to 2 million, average new construction since the early 1970s has hovered around 1.5 million to 1.75 million new starts per year. During the same period, the number of American households has increased by 48 million, or 75 percent, according to the U.S. Census Bureau. It is plain to see that the family demand for homes has far outstripped the supply of newly built residences. So it should not be shocking that home prices have tended to rise on a steady basis, averaging 6.5 percent price gains over the last 35 years." 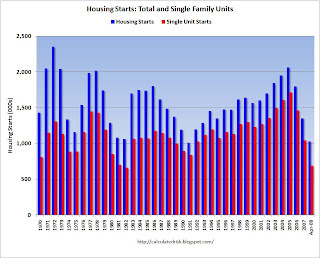 Then Kudlow goes on to state:

"During the same period, the number of American households has increased by 48 million, or 75 percent, according to the U.S. Census Bureau. It is plain to see that the family demand for homes has far outstripped the supply of newly built residences."

According to the Census Bureau's Housing and Homeownership data, the number of occupied housing units increased from 63.6 million in 1970 to 108.2 million in 2005, or about 44.6 million.

Some of these housing units are second homes, but why is it "plain to see" that demand for homes had "outstripped" supply? There were significantly more housing units built (57 million starts) during this period than new households formed (44.6 million) in the U.S.!

Perhaps Kudlow, when looking at those peaks of housing starts in the '70s and early '80s, was fooled into thinking that the recent peak in activity wasn't extraordinary, especially since the U.S. population is growing. This was an inaccurate view. 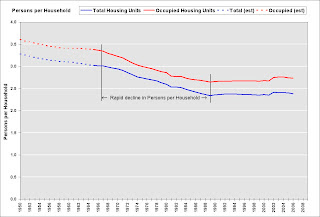 Note: the dashed lines indicates estimates based on the decennial Census for 1950 and 1960.

Starting in the late '60s there was a rapid decrease in the number of persons per household until about the late '80. This was primarily due to the "baby boom" generation forming new households en masse.

It was during this period - of rapid decline in persons per household - that the peaks in housing starts occurred. Many of those starts, especially in the '70s, were for apartments. Even if there had been no increase in the U.S. population, the U.S. would have needed approximately 27% more housing units at the end of this period just to accommodate the change in demographics (persons per household).

Now look at the period since 1988, the persons per household has remained flat. The increase in 2002 was due to revisions, and isn't an actual shift in demographics.

Here is a simple formula for housing starts (assuming no excess inventory):

So, unless Kudlow is arguing for a significant further reduction in housing size, he shouldn't have been comparing starts in recent years to starts in the '70s and '80s.

And finally, Kudlow should have been looking at the rampant speculation in 2005, both with flippers and homebuyers using excessive leverage. That is what defines a bubble, and that is what I focused on in April 2005: Housing: Speculation is the Key.
Read on ... there is much more.
Posted by Calculated Risk on 5/25/2008 05:35:00 PM
Newer Post Older Post Home