The NAR reports that Existing Home sales were at 5.03 million (SAAR) unit rate in February.

Existing-home sales – including single-family, townhomes, condominiums and co-ops – rose 2.9 percent to a seasonally adjusted annual rate of 5.03 million units in February from a pace of 4.89 million in January, but remain 23.8 percent below the 6.60 million-unit level in February 2007. 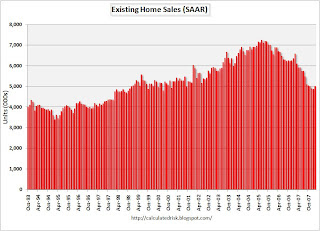 Here is a graph of Not Seasonally Adjusted existing home sales for 2005 through 2008. 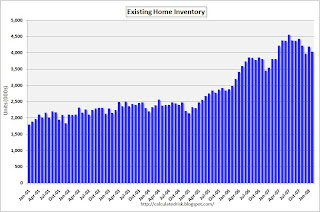 The third graph shows nationwide inventory for existing homes. According to NAR, inventory decreased to 4.03 million homes for sale in February.

Total Total housing inventory fell 3.0 percent at the end of February to 4.03 million existing homes available for sale, which represents a 9.6-month supply at the current sales pace, down from a 10.2-month supply in January.

The typical pattern is for inventory to decline in December, and then to slowly rebound in January and February, and really start to increase in March.

I'd expect record levels of existing home inventory later this spring and summer. 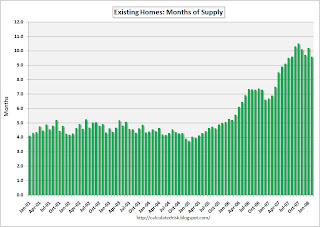 Months of supply decreased to 9.6 months.