From Professor Delong: Sounding the Alarm on the Financial Crisis

"Stage III of a financial crisis is when a central bank runs out of ammunition--when pushing interest rates too the floor and swapping out all of its assets does not restore the good equilibrium. Then you face a threefold choice: depression, inflation, or public intervention. Depression is to be avoided. Inflation--resolving the financial crisis by printing enough money to boost the price level far enough that all of a sudden everyone's incomes and real asset values are high enough to pay off their nominal debts--is generally best avoided too. As John Maynard Keynes wrote more than eighty years ago: "The Individualistic Capitalism of today, precisely because it entrusts saving to the individual investor and production to the individual employer, presumes a stable measuring-rod of value, and cannot be efficient--perhaps cannot survive--without one."

So if Depression is unthinkable, and inflation is best avoided, this leaves public action. If the good equilibrium has vanished - as it looks like it has - because the supply of risky assets is too large for financial intermediaries to want to hold them given their capital, then the central government has to take action: to boost or to make financial intermediaries boost their capital so that they will demand more risky assets at high prices, and to diminish the supply of risky assets offered on the financial markets by either a) guaranteeing some of them or b) by buying up some of them itself.

It's time to start thinking. If we don't want to wind up in a deep depression or a big inflation, it is time to recognize might well run out of ammunition in dealing with this financial crisis, and figure out what kind of government action we want to see, and how we can set in in motion quickly if it becomes necessary."

I do not believe we've reached what Professor DeLong calls Stage III of a financial crisis - and I don't think the Fed is out of ammunition - but I think DeLong is correct that we should be planning ahead. The Fed can only do so much, and DeLong is arguing we should be prepared if it becomes clear the Fed is ineffective.

Treasury rates have plunged close to zero, even though Fed funds is still 2.25%. Since open-market operations take place in Treasuries, I take this to mean that the Fed may not actually be able to reduce short-term rates much from current levels — which means, in turn, that conventional monetary policy has been taken off the table. 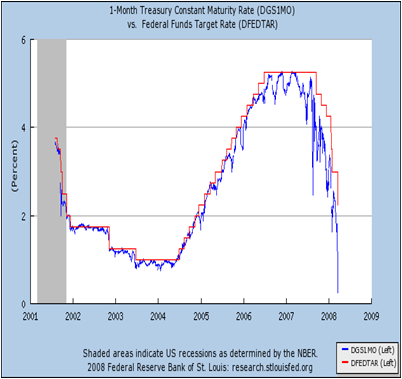