Housing as an Engine of Recovery

Post-moderation recessions haven’t been deliberately engineered by the Fed, they just happen when credit bubbles or other things get out of hand.

And while they haven’t been as deep as the older type of recession, they’ve proved hard to end (not officially, but in terms of employment), precisely because housing — which is the main thing that responds to monetary policy — has to rise above normal levels rather than recover from an interest-imposed slump.

I've written extensively about using housing as a leading indicator for recessions. Last year, at the Jackson Hole conference, Professor Leamer of the UCLA Anderson Forecast presented a very readable paper on this topic: Housing and the Business Cycle

The following graph shows that housing usually leads the economy into recession. 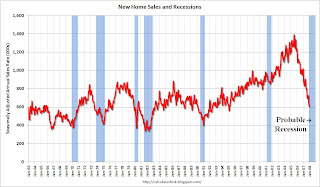 This graph shows New Home Sales vs. recessions for the last 45 years. New Home sales were falling prior to every recession, with the exception of the business investment led recession of 2001.

Note that the escalation of the Vietnam War in the '60s kept the economy out of recession, even though New Home sales were falling. I've also indicated the probably current recession - possibly starting in December (as shown on graph).

But here is a key point: not only does housing usually lead the economy into recession, but housing is usually an engine for recovery as the economy emerges from recession. 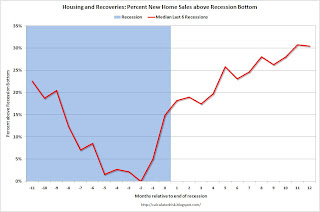 The second graph is constructed by normalizing new home sales at the end of the last six recessions. Then the median is plotted as a percent from the recession bottom. Note that month zero is the last month of each recession.

This shows that typically housing bottoms a few months before the rest of the economy - and then acts as an engine of growth coming out of the recession. 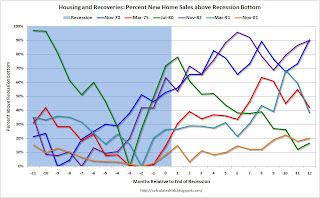 The third graph is the data for each of the last 6 recessions. Notice that housing didn't boom coming out of the 2001 recession (an investment led recession), and faltered following the recession ending in July 1980 (green line) because of the double dip recession of 1980 and '81/'82.

For the last 6 recessions, housing bottomed 2 to 9 months before the end of the recession.

Given the current fundamentals of housing – significant oversupply, falling demand – it is very unlikely that housing will act as an engine of growth any time soon. We need to see a significant reduction in supply before there will be any increase in residential investment.

So, for those expecting a 2nd half recovery in the economy, I believe they need to look elsewhere for growth – and they need to argue this time is different, i.e. that the economy will recover before housing this time.

More likely the economy will remain sluggish well into 2009 and the effects of the recession will linger. It is possible that fiscal and monetary stimulus will provide some 2nd half boost to GDP, but if that does take the economy out of an official recession, then I believe a double dip recession (or something that feels like one) is very probable.

Housing is still the key to the economy. And the housing outlook remains grim.
Posted by Calculated Risk on 2/10/2008 04:00:00 PM
Newer Post Older Post Home