From the WSJ: FDIC Readies for a Rise in Bank Failures (hat tip Peter)

The Federal Deposit Insurance Corp. is taking steps to brace for an increase in failed financial institutions as the nation's housing and credit markets continue to worsen.

FDIC spokesman Andrew Gray said the agency was looking to bulk up "for preparedness purposes." ...

The agency, which insures accounts at more than 8,000 financial institutions, is also seeking to hire an outside firm that would help manage mortgages and other assets at insolvent banks, according to a newspaper advertisement.
...
"Regulators are bracing for well over 100 bank failures in the next 12 to 24 months, with concentrations in Rust Belt states like Michigan and Ohio, and the states that are suffering severe housing-market problems like California, Florida, and Georgia," said Jaret Seiberg, Washington policy analyst for financial-services firm Stanford Group.

Frequent contributor FFIDC has mentioned these hiring efforts for months in the comments. I expect quite a few bank failures over the next couple of years, mostly due to bad Construction & Development (C&D) and Commercial Real Estate (CRE) loans.

Look at the concentration of C&D loans in late 2006 (from the FDIC Semiannual Report: Economic Conditions and Emerging Risks in Banking):

Small and mid-size institutions have been increasing their concentrations in riskier assets, such as CRE loans and construction and development (C&D) loans. This suggests that, although small and mid-size institutions have been more successful in limiting the erosion of their nominal NIMs, they have achieved this success in part by assuming higher levels of credit risk. 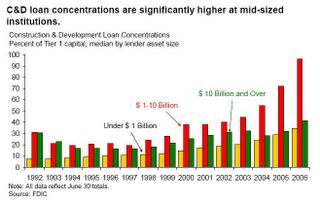 ... continued increases in concentrations and reports of loosened underwriting standards at FDIC-insured institutions signal the potential for future credit quality deterioration. In addition, regulators have noted increasing C&D and overall CRE loan
concentrations, especially at institutions with total assets between $1 billion and $10 billion. Four of six Regional Risk Committees expressed some level of concern about CRE lending, in part due to continuing increases in concentrations.