Last week I posted a chart (see Goldman Sachs on Housing) from First American CoreLogic that showed the distribution of home equity among US mortgage holders at the end of 2006: 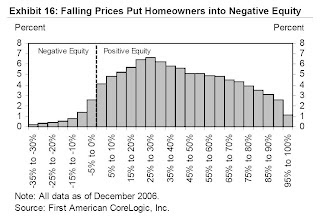 The price decline in 2007 would move the dashed line one column to the right, putting another 4% of U.S. homeowners into the no / negative equity category.

But what do these percentages mean in actual numbers? According to the Census Bureau's 2006 American Community Survey (see table here) there were 51,234,170 household with mortgage in the U.S. in 2006.

The following graph shows the number of homeowners with no or negative equity, using the most recent First American data, with several different price declines. 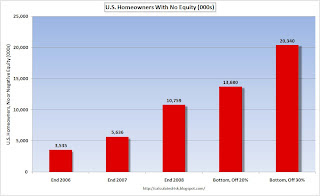 At the end of 2006, there were approximately 3.5 million U.S. homeowners with no or negative equity. (approximately 7% of the 51 million household with mortgages).

If prices decline an additional 10% in 2008, the number of homeowners with no equity will rise to 10.7 million.

The last two categories are based on a 20%, and 30%, peak to trough declines. The 20% decline was suggested by MarketWatch chief economist Irwin Kellner (See How low must housing prices go?) and 30% was suggested by Paul Krugman (see What it takes). 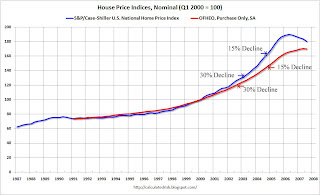 To put these price declines into perspective, this graph shows 15% and 30% nominal price declines for the S&P/Case-Shiller U.S. National Home Price Index and the OFHEO, Purchase Only, SA index.

Not all areas will see the same price declines, but this does provide a gross estimate of the number of homeowners with no equity based on various price decline assumptions. This number is important because homeowners with little or no equity are very vulnerable to negative events - they will have difficultly selling their home, and they can't borrow from their home to meet emergency needs.

This will also impact consumption, because for these homeowners, the Home ATM will be closed.

Finally, given the potential number of homeowners with negative equity, this raises the question if the HUD projections of "two million foreclosures by 2008 or 2009" are too low.