The OFHEO House Price Index for Q1 2007 is due to be release on May 31st. Here is an article on the FHFB data (hat tip Walt):

The first government housing-price numbers are in, and they're not pretty. ...

According to the Federal Housing Finance Board's quarterly survey of the 32 largest metropolitan areas, the average price of new and resale houses dipped 1.4 percent in the first quarter. That's the first decline recorded by the board in decades.

And here is some info on the FHFB data:

... the housing finance board's figures tend to be higher than those of other studies is that it includes new homes. Despite the giveaways and other come-ons used by builders to reduce inventories, new homes still lead the way when it comes to setting the price pace.

Another factor is that the survey covers the entire range of home sales, not just those with a mortgage at or below $417,000. That's the benchmark placed on Fannie Mae and Freddie Mac, two key suppliers of funds for home loans. But the quasi-government, federally chartered companies cannot buy loans above that amount from local lenders.

Coincidentally, the board's price survey is used to set the limit, also known as the conforming loan ceiling, on the loans Fannie and Freddie can purchase or roll into securities for sale to investors worldwide. But unlike the price survey conducted by the Office of Federal Housing Enterprise Oversight, the agency that regulates the two government-sponsored companies, the finance board's count is not limited to loans touched by Fannie and Freddie.

Another key distinction is that the finance board's survey covers a wider swath because it includes sales made with loans from all types of lenders. It is not limited to sales that involve Fannie Mae and Freddie Mac, which now touch, in one way or another, less than 50 percent of mortgages.

It also isn't limited to houses sold through multiple-listing services. A good many, but certainly not all, existing homes are sold through an MLS affiliated with the National Association of Realtors.

And finally, the housing finance board's research covers metropolitan areas as opposed to regions, even if the metro areas viewed are only the largest ones. So it tends to be more targeted than other studies.

Despite the problems with the OFHEO index, it is the most widely followed index. So here is a look ahead to Thursday: 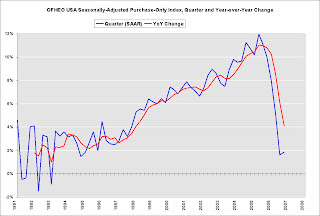 This is a graph of the OFHEO index based solely on purchase transactions (excludes refinance loans) through 2006. The Chicago Tribune article above suggests that the Q1 2007 OFHEO change will be negative. However it is unlikely that the YoY change will be negative yet. That will probably happen for the first time in Q2.
Posted by Calculated Risk on 5/27/2007 01:42:00 PM
Newer Post Older Post Home