The good news in the Q1 2007 GDP report was that private non-residential investment rebounded slightly. As I noted yesterday, investment slumps correlate very well with recessions. The following graphs are an update to previous graphs and include Q1 2007 (note these are year-over-year changes, not quarter-by-quarter). 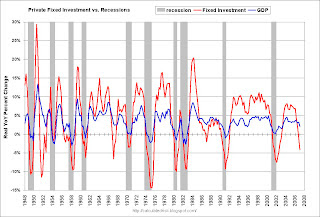 2) Private fixed investment has fallen 13 times since 1948 (14 including the current slump), with only 10 recessions. 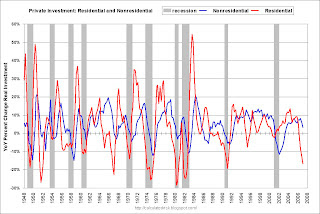 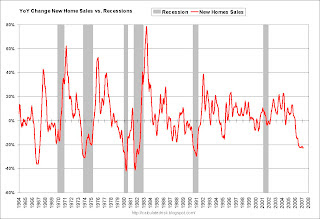 The final graph is the YoY change in New Home Sales from the Census Bureau.

1) When the YoY change in New Home Sales falls about 20%, usually a recession will follow. The one exception for this data series was the mid '60s when the Vietnam buildup kept the economy out of recession. Looking solely at this graph, one might expect the economy to already be in a recession - however these models are just guidelines, not perfect predictors. The pace of the current decline in new home sales hasn't been extremely high (only 20% YoY decline), and the slower the slump, the more the rest of the economy can absorb the impact.

And that brings us back to this piece of good news in the Q1 GDP report: Non-residential investment rebounded.