More from the Archetypical Eeyore

Last week Dallas Fed President Richard Fisher stepped up to the podium, but revealed little new in Fed thinking, simply noting the tight spot between accelerating inflation and slower growth. The only new information one could glean from his speech was when he described recession-minded analysts as “Eeyores.” Such a dismissive remark can only suggest that the idea of a rate cut is furthest from his mind. That said, Fisher’s “eighth inning” remark lingers in everyone’s minds – perhaps the best strategy is to bet against Fisher, and side with the “Eeyores.” 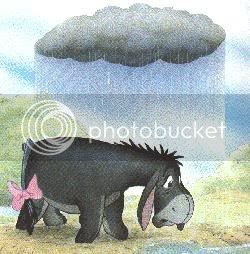 What is an Eeyore? From Wikipedia:

'Eeyore is a fictional character from the book series and cartoon Winnie-the-Pooh. ... He is a pessimistic, gloomy, old donkey who is a friend of Winnie the Pooh. Eeyore is hardly ever happy and when he is, he is still sardonic and a bit cynical.'

And who is the archetypical Eeyore? More from Tim Duy:

To be sure, policymakers have an eye on the housing slowdown, but I just doubt they feel much urgency. Certainly, not as much urgency as the current archetypical Eeyore, Nouriel Roubini, whose recent writing leaves me thinking about liquidating all my assets and rebalancing into a “diversified” portfolio of dry goods, gold, guns, and ammunition (which in Oregon would not be considered out of the ordinary).

And now from the archetypical eeyore himself, Professor Roubini writes: "The Biggest Slump in US Housing in the Last 40 Years"…or 53 Years?

"At this point there no doubt on whether the housing sector is contracting ... I have also argued before that the effects of housing on US economic growth and the role of housing in tipping the US economy into a recession in early 2007 are more significant than the role that the tech sector bust in 2000 played in tipping the economy into a recession in 2001."

Read Nouriel's piece for his analysis, but here is his conclusion:

"... the simple conclusion from the analysis above is that this is indeed the biggest housing slump in the last four or five decades: every housing indictor is in free fall, including now housing prices. By itself this slump is enough to trigger a US recession: its effects on real residential investment, wealth and consumption, and employment will be more severe than the tech bust that triggered the 2001 recession. And on top of the housing bust, US consumers are facing oil above $70, the delayed effects of rising Fed Fund and long term rates, falling real wages, negative savings, high debt ratios and higher and higher debt servicing ratios. This is the tipping point for the US consumer and the effects will be ugly. Expect the great recession of 2007 to be much nastier, deeper and more protracted than the 2001 recession."