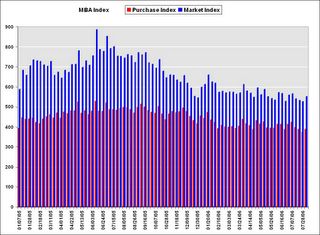 The average contract interest rate for one-year ARMs decreased to 5.96 percent from 6.18 percent ...

Change in mortgage applications from one year ago (from Dow Jones): 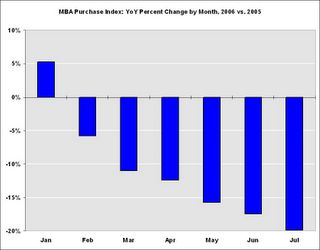 This graph shows the monthly YoY comparison between 2006 and 2005.

Purchase activity was especially strong in the Summer and early Fall of 2005, and that makes the comparisons look ugly. Still, year-to-date purchase activity is off 12.1% compared to 2005 and appears to be getting worse.

Even though there was a small increase in activity last week, the previous week was the least market activity since May 2002.
Posted by Calculated Risk on 8/09/2006 12:13:00 AM
Newer Post Older Post Home