A Recovery Built on a Marshland of Debt?

UPDATE:I've received a number of questions about these charts. Thanks to everyone! The first chart is from Barrons (I didn't check the numbers). However the numbers are from this Federal Reserve source: Debt growth, borrowing and debt outstanding tables

I agree that some of consumer debt (credit cards) might be double counted. The Financial Sectors debt is also interesting. This is primarily for intermediation so it is probably double counted too.

However, my concern with the burgeoning debt load was primary with the National Debt and the Mortgage debt component of household debt. Both have increased significantly over the last 4 years. These are the components that contribute to the "recovery built on a marshland of debt".

I will try to post some more information on the National Debt (and the structural deficit) and mortgage debt in the next few days.

Best Regards to All! And thanks for the feedback.

"I think the PRIMARY reason for Greenspan's conundrum is that the economy is weaker than it appears. Using GDP growth and unemployment, the US economy is healthy. But the level of debt (both consumer and government), the real estate "boom" that seems based on leverage and loose credit (see Volcker's recent comments), and the poor employment situation (especially the low level of participation) indicate an unhealthy economy. I believe this recovery is being built on a marshland of debt and the bond market is reflecting this weakness."

So here is the story in pictures: First from Barrons (via infoproc): 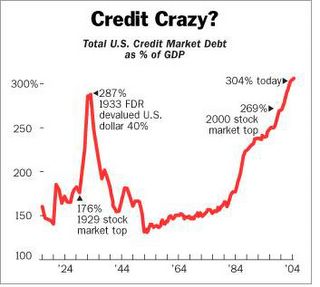 "The accompanying chart, which comes to us by grace of Trey Reik, of Clapboard Hill Partners, a New York-based investment outfit, shows one of the singular effects of Mr. Greenspan's eagerly accommodating reign at the Fed. It tells the story of credit in this fair land from 1916 through the present. Keeping in mind that Mr. G took over in 1987, you can readily see the trajectory picks up altitude abruptly from then until now.

Mr. Reik observes that for the past 100 years, the nation's credit-market debt has averaged between 140% and 160% of gross domestic product. The principal exceptions came in 1929, when the stock market went bananas, and in 1933, during the traumatized period that followed the Great Crash, when four years of the Depression (GDP shrank by an awesome 45%) hoisted the ratio to 287%, prompting a devaluation of the dollar. That was the all-time peak, never approached again until the remarkable rise that began in the 1980s and has resolutely continued ever since, lifting the ratio to today's astonishing 304%."

And the following chart from mwhodges compares the increase in debt vs. National Income. A close examination shows that America's Debt binge accelerated in the early '80s and then subsided only to skyrocket again during the last four years. 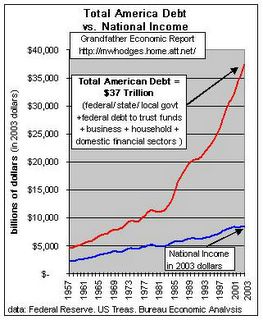 Much of this data comes from the Federal Reserve's Flow of Funds report. One of the key reports is the Debt Growth by Sector. As an example, mortage debt has grown from $313 Billion in 1971 to $7.3 Trillion at the end of Q3 2004. Consider this table (all nominal dollars):

Although mortgage debt, as a percentage of GDP, has been increasing for years, the last four years have seen an astounding increase in debt. This increase has occured while the median real wage has hardly changed. This has lead many obervers to wonder if Americans are using their homes as ATMs. (See Paul Volcker's comments) 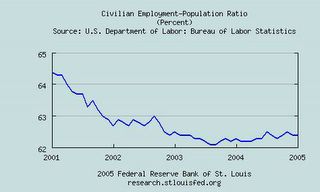 This is very concerning since usually in an economic recovery the participation rate increases. This recovery continues to see sluggish job growth and, as a direct result, restrained aggregate income.

And finally, I have to mention the National Debt. The following chart shows the dramatic increase in the debt over the last four years: 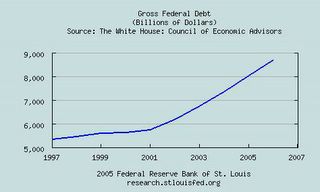 "If something cannot go on forever, it will stop."