Mortgage applications decreased 0.8 percent from one week earlier, according to data from the Mortgage Bankers Association’s (MBA) Weekly Mortgage Applications Survey for the week ending November 25, 2022. This week’s results include an adjustment for the observance of the Thanksgiving holiday.

“Mortgage rates declined again last week, following bond yields lower. The 30-year fixed mortgage rate decreased to 6.49 percent and has now fallen 57 basis points over the past four weeks. Additionally, mortgage rates for most other loan types declined,” said Joel Kan, MBA’s Vice President and Deputy Chief Economist. “The economy here and abroad is weakening, which should lead to slower inflation and allow the Fed to slow the pace of rate hikes. Purchase activity increased slightly after adjusting for the Thanksgiving holiday, but the decline in rates was still not enough to bring back refinance activity. Refinance applications fell another 13 percent, and the refinance share of applications was at 26 percent. Both measures were at their lowest levels since 2000.”
...
The average contract interest rate for 30-year fixed-rate mortgages with conforming loan balances ($647,200 or less) decreased to 6.49 percent from 6.67 percent, with points remaining at 0.68 (including the origination fee) for 80 percent loan-to-value ratio (LTV) loans.
emphasis added 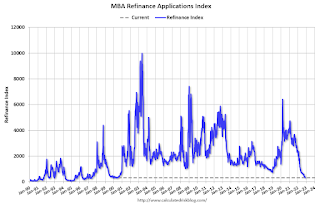 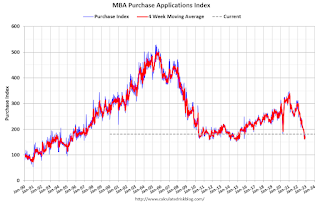 According to the MBA, purchase activity is down 41% year-over-year unadjusted.
The purchase index is just below the pandemic low and up slightly from the lowest level since 2015.