The key report scheduled for this week is the February employment report.

Other key reports scheduled for this week are ISM Manufacturing and February vehicle sales.

Fed Chair Powell presents the Semiannual Monetary Policy Report to the Congress on Wednesday and Thursday.

9:45 AM: Chicago Purchasing Managers Index for February. The consensus is for a reading of 63.9, down from 65.2 in January.

10:00 AM: Construction Spending for December. The consensus is for a 0.2% decrease in construction spending. 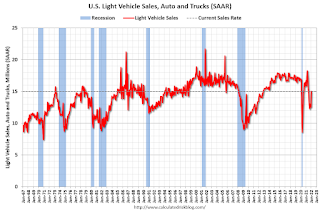 8:15 AM: The ADP Employment Report for February. This report is for private payrolls only (no government). The consensus is for 320,000 payroll jobs added in February, up from 301,000 lost in January.

10:00 AM: Testimony, Fed Chair Jerome Powell, Semiannual Monetary Policy Report to the Congress, Before the Committee on Financial Services, U.S. House of Representatives

8:30 AM: The initial weekly unemployment claims report will be released.  The consensus is for a decrease to 230 thousand from 232 thousand last week. 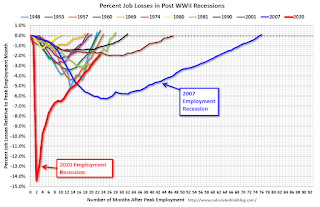 This graph shows the job losses from the start of the employment recession, in percentage terms.