Industrial production fell 1.3 percent in September after moving down 0.1 percent in August; output was previously reported to have risen 0.4 percent in August. In September, manufacturing output decreased 0.7 percent: The production of motor vehicles and parts fell 7.2 percent, as shortages of semiconductors continued to hobble operations, while factory output elsewhere declined 0.3 percent. The output of utilities dropped 3.6 percent, as demand for cooling subsided after a warmer-than-usual August. Mining production fell 2.3 percent.

Despite the decrease in September, total industrial production rose 4.3 percent at an annual rate for the third quarter as a whole, its fifth consecutive quarter with a gain of at least 4 percent. 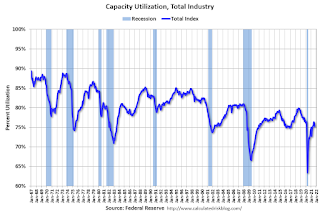 This graph shows Capacity Utilization. This series is up from the record low set in April 2020, but below the level in February 2020 (pre-pandemic). 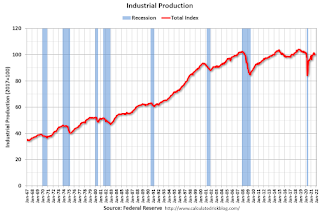 Industrial production decreased in September to 100.0. This is 1.3% below the February 2020 level.

The change in industrial production was well below consensus expectations.
Calculated Risk at 10/18/2021 09:23:00 AM