Lawler: Update on the Dismal Demographics of 2020; "Smallest Population increase since 1918"

Here is an update from Tom Lawler:

Updated provisional data released by the CDC indicates that the US “demographics” in 2020 was even more dismal that what I indicated in my November report of last year. Provisional data through this week show that there were over 3.36 million deaths in 2020.

Deaths: US deaths last year were up by 17.8% from 2019. Given reporting lags in some states the total death count for last year will be somewhat higher than that shown in the table below, these number will probably be pretty close to the total.


While Covid-19 deaths were obviously the major reason for the spike in deaths last year, deaths not directly attributable to Covid-19 also increased significantly last year, especially (in % terms) for the 15-44 year old age groups. This increase may reflect Covid-related deaths not identified as such, the effect of some people not seeking medical help because of the pandemic, and a sharp rise in deaths related to drug overdoses.


Births: Provisional CDC data through September 2020 suggest that the multi-year downtrend in US births accelerated last year. According to these data, there were an estimated 2.729 million US births from January to September of last year, down 3.1% from the comparable period of 2019. If full year births for 2020 are down by the same Percentage from 2019, then US births for 2020 will total just 3.632 million, the lowest number of births since 1981.

“Natural” Increase: Based on these death and birth data, the so-called “natural” increase in the US population (births minus deaths) totaled just 267,894 last year, the lowest such increase in what I believe is over a century.


Net International Migration: While there is little doubt that combination of the pandemic and Trump administration policies resulted in a sharp decline in net international migration (immigration minus emigration), from what level to what level is not at all clear. There are not any good, timely data on either immigration or (especially) emigration, and historical data are not very reliable. 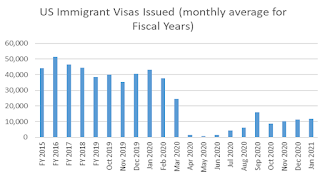