“Housing prices rose in July,” says Craig J. Lazzara, Managing Director and Global Head of Index Investment Strategy at S&P Dow Jones Indices. “The National Composite Index gained 4.8% relative to its level a year ago, slightly ahead of June’s 4.3% increase. The 10- and 20-City Composites (up 3.3% and 3.9%, respectively) also rose at an accelerating pace in July compared to June. The strength of the housing market was consistent nationally – all 19 cities for which we have July data rose, with 16 of them outpacing their June gains.

“In previous months, we’ve noted that a trend of accelerating increases in the National Composite Index began in August 2019. That trend was interrupted in May and June, as price gains decelerated modestly, but now may have resumed. Obviously more data will be required before we can say with confidence that any COVID-related deceleration is behind us.
emphasis added 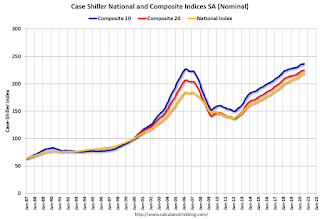 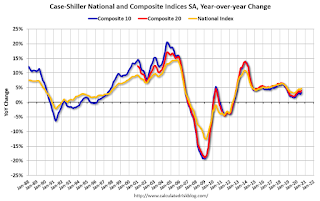 The National index SA is up 4.8% year-over-year.

Note: According to the data, prices increased in 18 cities month-over-month seasonally adjusted.