From the Census Bureau reported that overall construction spending decreased in April:


Spending on private construction was at a seasonally adjusted annual rate of $1,004.1 billion, 3.0 percent below the revised March estimate of $1,035.6 billion. ... 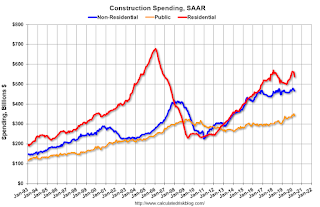 Residential spending is 21% below the previous peak.

Non-residential spending is 13% above the previous peak in January 2008 (nominal dollars).

Public construction spending is 5% above the previous peak in March 2009, and 30% above the austerity low in February 2014. 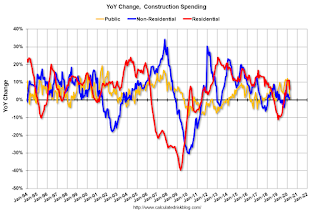 This was above consensus expectations of a 6% decrease in spending, and construction spending for February and March were revised up.

Construction was considered an essential service in most areas and hasn't declined sharply like many other sectors.
Posted by Calculated Risk on 6/01/2020 10:30:00 AM
Newer Post Older Post Home