Mortgage applications decreased 3.3 percent from one week earlier, according to data from the Mortgage Bankers Association’s (MBA) Weekly Mortgage Applications Survey for the week ending May 24, 2019.

... The Refinance Index decreased 6 percent from the previous week. The seasonally adjusted Purchase Index decreased 1 percent from one week earlier. The unadjusted Purchase Index decreased 3 percent compared with the previous week and was 7 percent higher than the same week one year ago.
...
“Concerns over European economic growth and ongoing uncertainty about a trade war with China were some of the main factors that kept mortgage rates low last week. Even with lower rates on three of the five surveyed loan types, refinance activity fell 6 percent, essentially reversing an 8 percent increase the week before,” said Joel Kan, MBA’s Associate Vice President of Economic and Industry Forecasting. “Purchase applications decreased for the third straight week, but remained more than 7 percent higher than a year ago. It is possible that the trade dispute is causing potential homeowners to hold off on buying, with the fear that further escalation – or the lack of resolution – may have adverse impacts on the economy and housing market.”
...
The average contract interest rate for 30-year fixed-rate mortgages with conforming loan balances ($484,350 or less) remained unchanged from 4.33 percent, with points decreasing to 0.42 from 0.43 (including the origination fee) for 80 percent loan-to-value ratio (LTV) loans.
emphasis added 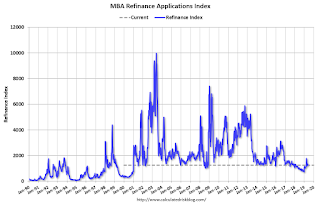 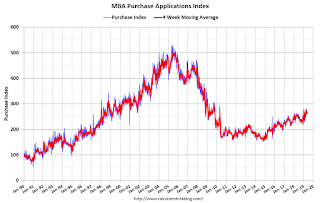