NAHB: Builder Confidence decreases for the 55+ Housing Market in Q3

This is a quarterly index that was released last week by the the National Association of Home Builders (NAHB). This index is similar to the overall housing market index (HMI). The NAHB started this index in Q4 2008 (during the housing bust), so the readings were initially very low

From the NAHB: 55+ Housing Builders and Developers Stay Confident in Third Quarter


Builder confidence in the single-family 55+ housing market continued to be positive in the third quarter of 2017, according to the National Association of Home Builders (NAHB) 55+ Housing Market Index (HMI), released [last week].

While the index measuring builder confidence in the single-family 55+ market dropped from a reading of 66 in the second quarter to 59 this quarter, it’s the 14th quarter in a row in which the reading was above 50, the break-even point at which more respondents see conditions as good than poor.

The effects of destructive hurricanes and a series of wildfires earlier this fall are likely reflected in this quarter’s survey, which was conducted in September, said Dennis Cunningham, chairman of NAHB’s 55+ Housing Industry Council and president of ActiveWest Builders in Coeur d’Alene, Idaho.

“However, this is a temporary effect. Overall confidence remains high and builders continue to be optimistic about the 55+ market in the long run.”
...
“The decline in the 55+ single-family HMI is consistent with slight softening of other measures of single-family construction seen recently, driven by the effect of the natural disasters on top of ongoing issues with the supply of labor, lots and some building materials,” said NAHB Chief Economist Robert Dietz. “However, market conditions on balance remain favorable, and we expect gradual continued growth in the 55+ housing sector.”
emphasis added 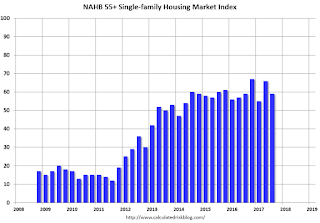 This graph shows the NAHB 55+ Single Family HMI through Q3 2017.  And reading above 50 indicates that more builders view conditions as good than as  poor.  The index decreased to 59 in Q3 down from 66 in Q2.

There are two key drivers in addition to the improved economy: 1) there is a large cohort moving into the 55+ group, and 2) the homeownership rate typically increases for people in the 55 to 70 year old age group. So demographics should be favorable for the 55+ market.
Posted by Calculated Risk on 11/06/2017 01:35:00 PM
Newer Post Older Post Home