From the MBA: Mortgage Foreclosures and Delinquencies Continue to Drop


The delinquency rate for mortgage loans on one-to-four-unit residential properties decreased to a seasonally adjusted rate of 4.99 percent of all loans outstanding at the end of the third quarter of 2015. This was the lowest level since the first quarter of 2007. The delinquency rate decreased 31 basis points from the previous quarter, and 86 basis points from one year ago, according to the Mortgage Bankers Association's (MBA) National Delinquency Survey. 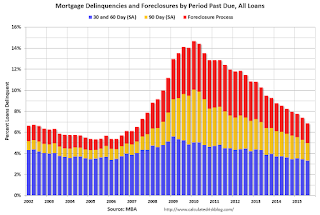 The percent of loans 30 and 60 days delinquent are back to normal levels.

The percent of loans in the foreclosure process also peaked in 2010 and and is about 80% of the way back to normal.

So it has taken 5 1/2 years to reduce the backlog of seriously delinquent and in-foreclosure loans by over 80%, so a rough guess is that serious delinquencies and foreclosure inventory will be back to normal near the end of 2016.  Most other mortgage measures are already back to normal, but the lenders are still working through the backlog of bubble legacy loans.
Calculated Risk at 11/17/2015 10:28:00 AM