Yesterday I pointed out that a blog post on demographics at the Financial Times would make more sense if it had been written a decade ago.

A decade ago it was obvious that demographics would be a drag on the economy. Even without the financial crisis, we would have expected a slowdown in growth.

But now the prime working age population is growing again, and we can expect growth to pick up over the next decade.

Here is a graph of the prime working age population (this is population, not the labor force) from 1948 through March 2015 - with projections from the Census Bureau through 2040. 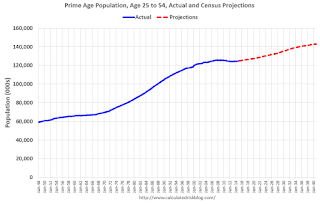 That is key reason that growth has slowed (see Demographics and GDP: 2% is the new 4%).  Add the residual effects of the financial crisis to the drag from demographics - and the last decade was no surprise.