The U.S. Census Bureau of the Department of Commerce announced today that construction spending during November 2014 was estimated at a seasonally adjusted annual rate of $975.0 billion, 0.3 percent below the revised October estimate of $977.7 billion. 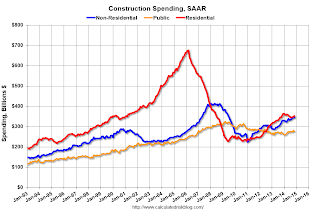 Non-residential spending is 18% below the peak in January 2008, and up about 53% from the recent low.

Public construction spending is now 15% below the peak in March 2009 and about 5% above the post-recession low. 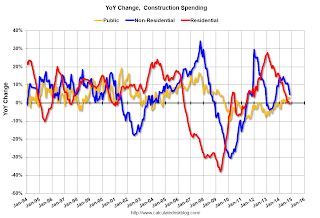 Looking forward, all categories of construction spending should increase in 2015. Residential spending is still very low, non-residential is starting to pickup (except oil and gas), and public spending has probably hit bottom after several years of austerity.

This was below the consensus forecast of a 0.5% increase, however there were some upward revisions to spending in September and October.
Calculated Risk at 1/02/2015 11:31:00 AM