Comments on Q3 GDP and Investment

The change in private inventories tends to bounce around, and this will probably be a drag on Q4 GDP.

The good news is PCE will probably increase in 2014 with most of the impact of tax increases and budget cuts ending.  But Q4 2013 will probably be another weak quarter impacted by the government shutdown, a negative contribution from private inventories, and still weak final demand.

For the following graph, red is residential, green is equipment and software, and blue is investment in non-residential structures. So the usual pattern - both into and out of recessions is - red, green, blue.

The dashed gray line is the contribution from the change in private inventories. 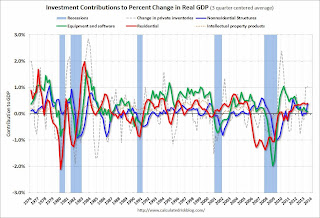 Residential Investment (RI) made a positive contribution to GDP in Q3 for the twelfth consecutive quarter. Usually residential investment leads the economy, but that didn't happen this time because of the huge overhang of existing inventory.

Overall this was another weak GDP report, but it does look like GDP will pickup in 2014.