Based on an estimate from WardsAuto, light vehicle sales were at a 15.24 million SAAR in September. That is up 2.4% from September 2012, and down 4.9% from the sales rate last month. Some of the decline in September (and strong August) was related to the timing of the Labor Day holiday.

This was below the consensus forecast of 15.8 million SAAR (seasonally adjusted annual rate). 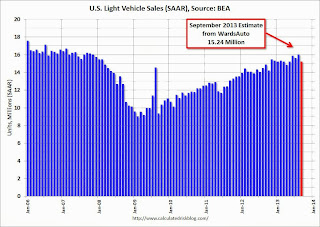 This was the lowest sales rate since April, but followed a strong August - August was the first time the sales rate was over 16 million since November 2007.

The growth rate will probably slow in 2013 - compared to the previous three years - but this will still be another solid year for the auto industry. 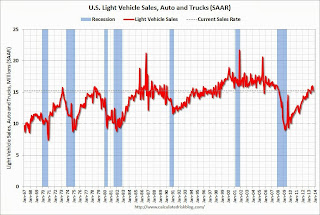 Unlike residential investment, auto sales bounced back fairly quickly following the recession and are still a key driver of the recovery.    Looking forward, growth will slow for auto sales.  If sales average the recent pace for the entire year, total sales will be up about 9% from 2012, not quite double digit but still strong.
Calculated Risk at 10/01/2013 02:47:00 PM