From Kris Hudson at the WSJ: New-Home Sales Not So August


A survey of 273 builders by John Burns Real Estate Consulting in Irvine, Calif., found that the respondents’ sales of new homes declined by 4% in August from a month earlier. In past years, August typically has yielded a 2% gain from the July figure. Burns estimates that its survey, conducted Aug. 29 to Sept. 3, spans roughly 16% of new-home sales in the U.S.

Those figures show substantial change from the results of Burns’s July survey in which 64% of builders reported raising prices, 36% held them study and one builder—statistically 0%—said it cut prices.

This is similar to the report from home builder Hovnanian earlier this week.

Builders have been raising prices significantly, and combined with rising mortgage rates, this has slowed down new home buying. 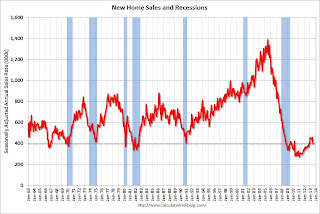 However, as this graph shows (through July), new home sales are still historically low, and I expect sales to continue to increase over the next few years.