Here are a couple of graphs from the report: 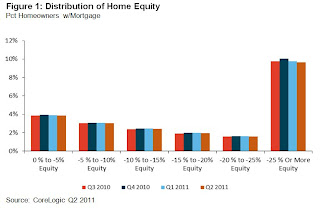 Close to 10% of homeowners with mortgages have more than 25% negative equity. This is trending down slowly - the decline is apparently mostly due to homes lost in foreclosure. 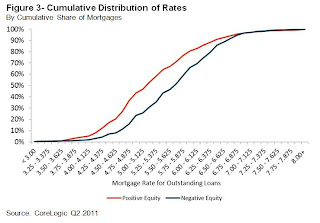 The second graph from CoreLogic shows the cumulative distribution of mortgage rates for borrowers with positive and negative equity.

1 "The definition of an above market rate was 5.1%, which is roughly the current mortgage rate of 4.1% plus a 100 basis point refinance trigger." 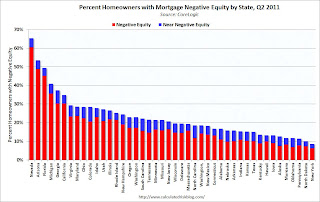 From CoreLogic: "Nevada had the highest negative equity percentage with 60 percent of all of its mortgaged properties underwater, followed by Arizona (49 percent), Florida (45 percent), Michigan (36 percent) and California (30 percent).