From the NY Fed: Total Household Debt Rises as 2018 Marks the Ninth Year of Annual Growth in New Auto Loans


The Federal Reserve Bank of New York’s Center for Microeconomic Data today issued its Quarterly Report on Household Debt and Credit, which shows that total household debt increased by $32 billion (0.2%) to $13.54 trillion in the fourth quarter of 2018. It was the 18th consecutive quarter with an increase and the total is now $869 billion higher than the previous peak of $12.68 trillion in the third quarter of 2008. Furthermore, overall household debt is now 21.4% above the post-financial-crisis trough reached during the second quarter of 2013. The Report is based on data from the New York Fed’s Consumer Credit Panel, a nationally representative sample of individual- and household-level debt and credit records drawn from anonymized Equifax credit data.
...
Mortgage originations declined to $401 billion from $445 billion, the lowest level seen in nearly four years. 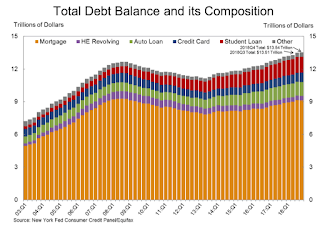 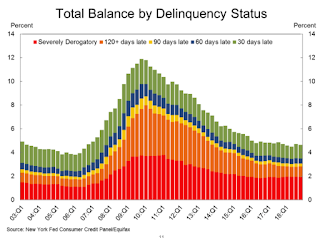 The overall delinquency rate decreased slightly in Q4.  From the NY Fed:

About 195,000 consumers had a bankruptcy notation added to their credit reports in 2018Q4, five thousand fewer than the 200,000 individuals who filed in the 4th quarter of 2017. New bankruptcy notations have been at historically low levels since 2016.