After some weakness early in the year, hotel occupancy has picked up in recent weeks.

From HotelNewsNow.com: STR: US hotel results for week ending 1 April


The U.S. hotel industry recorded positive results in the three key performance metrics during the week of 26 March through 1 April 2017, according to data from STR.

STR analysts note that performance was lifted for the second week in a row by an Easter calendar shift (27 March 2016). In comparison with the week of 27 March through 2 April 2016, the industry reported the following in year-over-year comparisons: 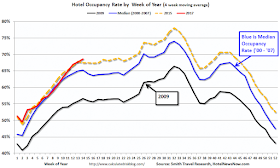 For hotels, occupancy will now move mostly sideways until the summer travel season.