When the Census Bureau released its estimates for the U.S. population in December, most press coverage focused on which states saw the fastest population growth last year. What many missed, however, was that the Census Bureau significantly reduced its population estimates for each of the past several years, with the major reason for the downward revisions stemming from reduced estimates of net international migration. The latter reductions were the result up an updated methodology used to estimate foreign-born emigration, as discussed in the following excerpt from the 2016 vintage “release notes.”


“The Vintage 2016 net international migration estimates reflect the following changes to the methodology since the release of the Vintage 2015 estimates:


The next table shows Census estimates of Net International Migration from the “Vintage 2015” population estimates compared to the most recent (“Vintage 2016”) estimates.


These downward population revisions were reflected in last Friday’s employment report, which showed the impact of updated population estimates on the 16+ year civilian non-institutional population assumptions used to produce employment and labor force estimates based on the “household” (CPS) survey.


While Census has not yet updated its estimates of age distribution of the population, data released as part of last Friday’s report allow one to estimate downward revisions in the 16+ civilian non-institutional population by age.


These new population estimates will, of course, be used by Census to produce household estimates based on the 2017 CPS/ASEC. However, Census typically does not revise previous-year estimates to reflect revisions in population estimates. As such, the change in the CPS/ASEC household estimate for March 2017 compared to the March 2017 estimate will probably be about 450,000 or so lower than it would have been without the recent methodological change used to estimate net international migration


As the table shows, the most recent projection of the US resident population for 2017 is almost 1.1 million lower than the projection from late 2014. 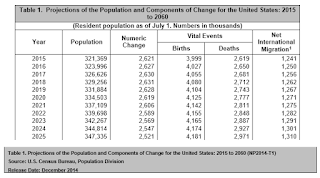 While updated estimates suggest that net international migration averaged about 900,000 over the past 5 years, the late 2014 projections assumed an average of about 1.256 million from 2015 to 2020. Even without the “Trump win” that number would currently be considered way to high, and today such a projection seems, in the words of demographer Dr. Vizzini, “inconceivable.”

For folks wondering why I am comparing recent estimates to a Census projection from December 2014, the reason is that the December 2014 projection is that latest the Census has released, and those projections have been used by quite a few analysts/institutions/organizations/etc. to produce and publish long-term projections of the number of US households. Indeed, in an unluckily-timed report released just eight days before the Census released it “Vintage 2016” population numbers, the Joint Center for Housing Studies published new household projections based on Census population projections from December 2014! (There are other serious problems with the JCHS report, but I won’t dwell on those).

But let’s just make an “educated guess” that net international migration would be at a level lower than it recently has been, and let’s arbitrarily pick an average of 750,000. Combed with reasonable projections for birth and dealt rates, that would produce a population projection of something like that shown in the table below. (I am not adjusting Census’ latest projection for 2017).