The new home sales report for February was slightly above expectations at 512,000 on a seasonally adjusted annual rate basis (SAAR), and combined sales for November, December and January were revised up. 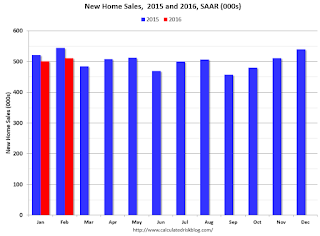 The comparisons for the first two months was difficult.  I also expect lower growth this year overall.

Houston (and other oil producing areas) will have a problem this year. Inventory of existing homes is increasing quickly and prices will probably decline in those areas. And that means new home construction will slow in those areas too. 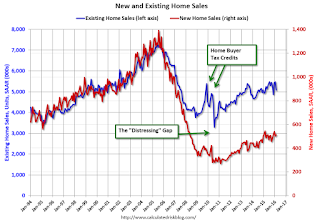 The "distressing gap" graph shows existing home sales (left axis) and new home sales (right axis) through February 2016. This graph starts in 1994, but the relationship had been fairly steady back to the '60s.