On Friday, Dean Baker wrote: The Question on People Leaving the Labor Force is 41-Year-Olds, Not 61-Year-Olds


In his discussion of today's employment report Neil Irwin notes that the unemployment rate is considerably lower than would otherwise be the case because so many people have simply given up looking for work and are therefore not counted as being unemployed. Irwin then adds that the big question is that if the economy eventually recovers is:

"How many of the 61-year-olds who gave up looking for a job in the last few years are going to return to the labor force when they smell opportunity, and how many have retired for good?"

Actually, the story of people leaving the labor force is not primarily one of older workers who are near retirement age, it is primarily a story of prime age workers. ...

It is difficult to envision any obvious reason why people in their prime working years would suddenly decide that they did not want to work other than the weakness of the labor market. Most of these workers will presumably come back into the labor market if they see opportunities for employment.

This brings up a few key points:

2) But there are other long term trends. One of these trends is for a decline in the participation rate for prime working age men (25 to 54 years old).

3) Although Dr. Baker argues that the decline in prime working age workers is due to "weakness of the labor market", this decline was happening long before the Great Recession. For some reasons, see: Possible Reasons for the Decline in Prime-Working Age Men Labor Force Participation and on demographics from researchers at the Atlanta Fed: "Reasons for the Decline in Prime-Age Labor Force Participation"

Lets take a look at Dean Bakers "41-Year-Olds". I used the BLS data on 40 to 44 year old men (only available Not Seasonally Adjusted since 1976). I choose men only to simplify. 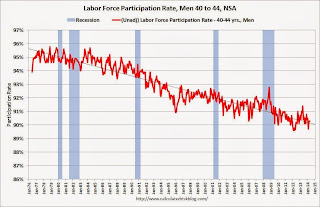 This graph shows the 40 to 44 year old men participation rate since 1976 (note the scale doesn't start at zero to better show the change).

Just looking at this graph, I don't think there are many "missing 41-Year-Old" men that will be returning to the labor force. 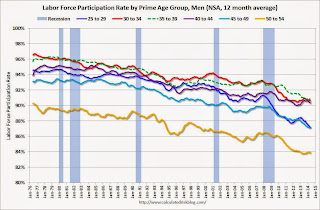 Clearly there is a downward trend for all 5 year age groups. When arguing about how many workers are "missing", we need to take these long term trends into account. 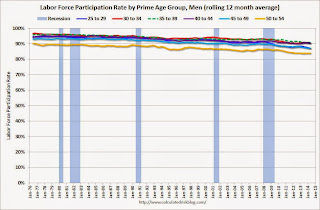 The third graph shows the same data but with the full scale (0% to 100%).  The trend is still apparent, but the decline has been gradual.

The bottom line is that the participation rate was declining for prime working age workers before the recession, there are several reasons for this decline (not just recent "economic weakness") and many estimates of "missing workers" are probably way too high.
Calculated Risk at 6/08/2014 12:00:00 PM