Builder Confidence declines in March to 44

The National Association of Home Builders (NAHB) reported the housing market index (HMI) decreased 2 points in March to 44. Any number under 50 indicates that more builders view sales conditions as poor than good.

From the NAHB: Builder Confidence Slips Two Notches in March


Builder confidence in the market for newly built, single-family homes paused for a third consecutive month in March, with a two-point reduction to 44 on the National Association of Home Builders/Wells Fargo Housing Market Index (HMI), released today.
...
“In addition to tight credit and below-price appraisals, home building is beginning to suffer growth pains as the infrastructure that supports it tries to re-establish itself,” explained NAHB Chief Economist David Crowe. “During the Great Recession, the industry lost home building firms, building material production capacity, workers who retreated to other sectors and the pipeline of developed lots. The road to a housing recovery will be a bumpy one until these issues are addressed, but in the meantime, builders are much more optimistic today than they were at this time last year.”
...
While the HMI component gauging current sales conditions declined four points to 47, the component gauging sales expectations in the next six months and the component gauging traffic of prospective buyers both posted gains, of one point to 51 and three points to 35, respectively, in March.

Three-month moving averages for each region’s HMI score were also mixed, with the Northeast holding unchanged at 39, the Midwest and South posting one-point declines to 47 and 46, respectively, and the West registering a four-point increase to 58. 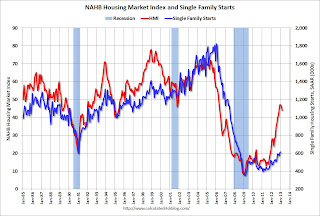 This graph compares the NAHB HMI (left scale) with single family housing starts (right scale). This includes the March release for the HMI and the January data for starts (February housing starts will be released tomorrow). This was below the consensus estimate of a reading of 47.
Calculated Risk at 3/18/2013 10:05:00 AM