The Census Bureau will report new home sales on Friday, and the consensus is for sales of 315 thousand on a seasonally adjusted annual rate (SAAR) basis. This is up less than 2% from the 310 thousand SAAR sales reported in January 2011.

That seems a little puzzling. Consider the following ...

First, look at the NAHB builder Housing Market Index. More builders still view sales as "poor" as opposed to "fair" or "good", but the HMI - and all of the components - are up sharply from a year ago (the most recent report was for February, but compare January 2012 to January 2011):


This would seem to suggest more than a 1% or 2% increase in sales.

Second, look at the recent builder reports (from Tom Lawler):

As I’ve noted many times, Census’ methodology for measured new SF sales is not directly comparable to reports from builders. I’m guessing that part of the “stronger than Census” builder reports reflect gains in market share, but I’m also guessing that overall new home sales were a bit better than preliminary Census data suggested.

The combination of higher order backlogs, stronger sales, and unusually mild weather in much of the country is likely to result in single-family starts numbers in the first few months of 2012 that are significantly higher than “consensus.” 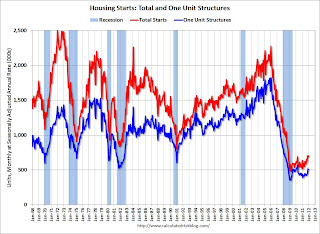 Sure enough. Single family housing starts were revised up sharply for December and were above 500 thousand SAAR in January. As Lawler notes, some of this was probably weather related, but some of the pick up was evident in the builder reports.

So if the builders are reporting a “stronger than Census” increase in sales (even accounting for market share gains), confidence is up (actually less pessimism), and single family starts are up sharply from a year ago, it seems surprising that new home sales were essentially unchanged in January.

Goldman Sachs is forecasting sales of 310 thousand SAAR in January 2012 (no change year-over-year), and Merrill Lynch is forecasting 315 thousand. I think I'll take the over.
Posted by Calculated Risk on 2/19/2012 12:44:00 PM
Newer Post Older Post Home