Total existing-home sales, which are completed transactions that include single-family homes, townhomes, condominiums and co-ops, increased 4.3 percent to a seasonally adjusted annual rate of 4.57 million in January from a downwardly revised 4.38 million-unit pace in December and are 0.7 percent above a spike to 4.54 million in January 2011.
...
Total housing inventory at the end of January fell 0.4 percent to 2.31 million existing homes available for sale, which represents a 6.1-month supply at the current sales pace, down from a 6.4-month supply in December. 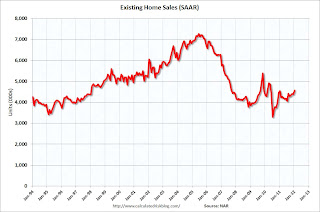 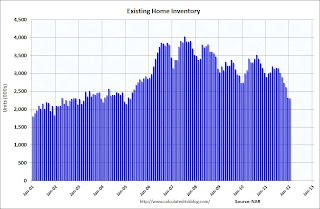 According to the NAR, inventory decreased to 2.31 million in January from 2.32 million in December. This is the lowest level of inventory since March 2005. 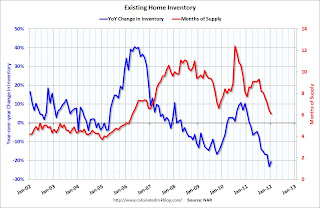 Inventory decreased 20.6% year-over-year in January from January 2011. This is the eleventh consecutive month with a YoY decrease in inventory.

Months of supply decreased to 6.1 months in January, down from 6.4 months in December.