Note: The Cleveland Fed has a discussion of a number of measures of inflation: Measuring Inflation 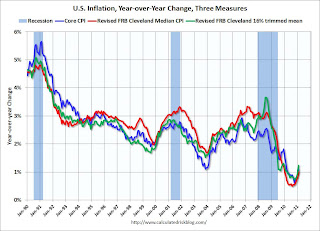 This graph shows these three measure of inflation on a year-over-year basis.

These measures all show that year-over-year inflation is still low, but increasing lately.