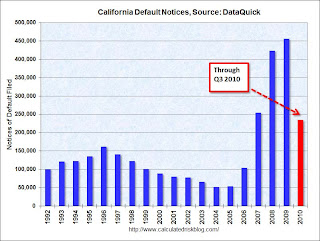 This graph shows the Notices of Default (NOD) by year through 2009, and for the first three quarters of 2010, in California from DataQuick.

Although the pace of filings has slowed from the previous two years, it is still very high by historical standards.


The number of foreclosure proceedings initiated by lenders between July and September edged higher on a quarter-to-quarter basis for the first time since early last year. But the number of home owners who went all the way through that process to foreclosure dipped from the previous quarter and a year ago, a real estate information service reported.

A total of 83,261 Notices of Default ("NODs") were recorded at county recorder offices during the July-through-September period. That was up 18.9 percent from 70,051 in the prior quarter, and down 25.5 percent from 111,689 in third-quarter 2009, according to San Diego-based MDA DataQuick.
...
"Over the past year, with some minor ups and downs, financial institutions and their servicers have been processing a fairly steady number of defaults each quarter. That probably has more to do with their capacity to process defaults, than with higher or lower levels of incoming distress," said John Walsh, DataQuick president.
...
The number of Trustees Deeds ("TDs") recorded, which reflects the number of houses and condos foreclosed on, totaled 45,377 during the third quarter. That was down 4.8 percent from 47,669 for the prior quarter, and down 9.3 percent from 50,013 for third-quarter 2009. The all-time peak for TDs was 79,511 in third-quarter 2008.

As prices fall later this year, we might see another increase in NODs. Although NODs will decline in 2010 from 2009, the number will still be very high and 2010 will be the third highest on record (only behind 2009 and 2008).

It will be interesting to see what happens in Q4. Since this is the first stage of the foreclosure process, and almost all foreclosures in California are non-judicial, I'd expect little or no impact from "foreclosure-gate".
Posted by Calculated Risk on 10/26/2010 07:44:00 PM
Newer Post Older Post Home