Notes: CoreLogic reports the year-over-year change. The headline for this post is for the change from July 2010 to August 2010. The CoreLogic HPI is a three month weighted average of June, July and August, and is not seasonally adjusted (NSA).

“Price declines are geographically expanding as 78 out of the largest 100 metropolitan areas are experiencing declines, up from 58 just one month ago” said Mark Fleming, chief economist for CoreLogic. 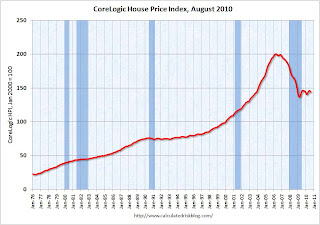 The index is 5.4% above the low set in March 2009, and I expect to see a new post-bubble low for this index later this year or early in 2011. As Fleming noted, prices are falling in most areas now (unusually for the summer months).