UPDATE: BofA noted this morning that 9 states reported delays in filing jobless claims because of labor day weekend ... so the actual was probably higher (ht Brian) 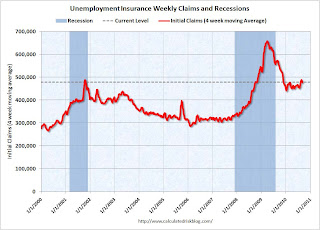 This graph shows the 4-week moving average of weekly claims since January 2000.

The dashed line on the graph is the current 4-week average. The four-week average of weekly unemployment claims decreased this week by 9,250 to 477,750.

This is the lowest level for weekly claims since early July, but it is still very high - and the current level of the 4-week average suggests a weak job market.
Posted by Calculated Risk on 9/09/2010 08:30:00 AM
Newer Post Older Post Home