It appears the 2nd half slowdown is here, but I think the U.S. will avoid a technical "double-dip" recession. As I noted last week, for the unemployed and marginally employed, and for many other Americans suffering with too much debt or stagnant real incomes, there is little difference between slower growth and a double-dip recession.

And a repeat of a couple graphs from yesterday ... 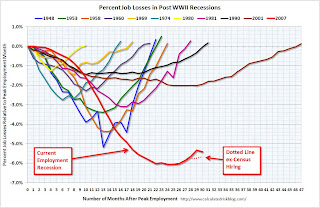 This graph shows the job losses from the start of the employment recession in percentage terms.

The dotted line shows the impact of Census hiring. In May, there were 339,000 temporary 2010 Census workers on the payroll. The number of Census workers will continue to decline - and the gap between the solid and dashed red lines will be mostly closed in three or four months. 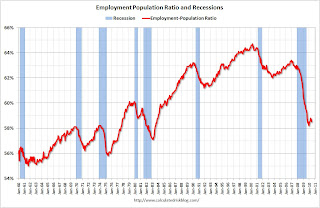